Jon Swaine in New York and Stephanie Kirchgaessner in Washington

Four men have been criminally charged in the US government’s investigation into the findings of the Panama Papers, the leaked files from the offshore law firm Mossack Fonseca. 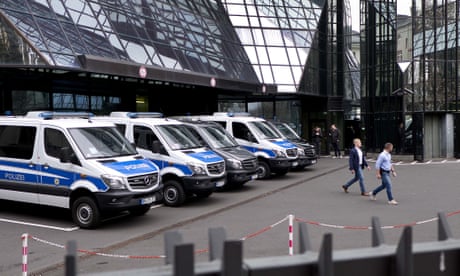 Prosecutors in New York said the four men, including an attorney and an investment manager who worked for the company, have been charged with wire fraud, tax fraud, money laundering, and other crimes.

The prosecutors said Mossack Fonseca perpetrated a “decades-long criminal scheme,” which was first exposed in a series of articles since 2015 by the Guardian and dozens of media partners around the world.

Geoffrey Berman, the US attorney in Manhattan, said in a statement on Tuesday that the four went to “extraordinary lengths to circumvent US tax laws” in order to boost the wealth of their clients.

“Now, their international tax scheme is over, and these defendants face years in prison for their crimes,” said Berman.

Those charged were Ramses Owens, a Panamanian attorney who worked for Mossack Fonseca; Dirk Brauer, an investment manager for a Mossack subsidiary; Richard Gaffey, a US-based accountant; and Harald Joachim von Der Goltz, a former US resident and Mossack client.

Von Der Goltz, an 81-year-old German citizen, was arrested in London on Monday, according to prosecutors, who thanked British authorities for their assistance in the case.

Brauer, 54, was arrested in Paris last month and Gaffey, 74, was arrested in Massachusetts on Tuesday. But Owens, 50, remains at large, US authorities said. The charges were unsealed on Tuesday. A court filing indicated that the men had been indicted in secret by a grand jury in September.

Investigators said Owens and Brauer had for years created and managed sham foundations, opaque offshore trusts and undeclared bank accounts to allow American clients of Mossack Fonseca to hide their income from US tax authorities.

Clients were then advised on how to illegally bring the funds from their offshore accounts into the US, using specially created debit cards and falsely claiming the money had come from the sale of companies.

Von Der Goltz, a German citizen who was allegedly one of the firm’s American-based clients, is accused of using shell companies to hide tens of millions of dollars from the IRS, and falsely claiming his Guatemalan mother was the true owner of his offshore holdings.

Gaffey is accused of assisting Von Der Goltz’s scheme and advising another American taxpayer, who is identified in Tuesday’s filings only as “Client 1”. Gaffey allegedly devised a system for this client to bring $3m of offshore funds into the US by falsely telling the IRS he had sold a company.

The indictments were announced less than a week after law enforcement officials in Frankfurt raided the offices of Deutsche Bank as part of a German investigation into alleged money laundering connected to the Panamanian scheme.

The decision to prosecute the case represented one of the most aggressive actions against white-collar crime so far by the Trump administration’s justice department.

What are the Panama Papers? A guide to history's biggest data leak

Apart from some of the largest fraud cases in US history, such as the decision to indict the accountant Arthur Andersen in the wake of the Enron scandal, white-collar prosecutors have not always aggressively pursued people involved in money-laundering.

Brian Benczkowski, an assistant attorney general, said on Tuesday: “The charges announced today demonstrate our commitment to prosecute professionals who facilitate financial crime across international borders and the tax cheats who utilize their services.”

Although the case is being brought by the Trump administration, it appears to have been initiated in 2016, by Preet Bharara, who was then US attorney for the southern district of New York, nominated by Barack Obama.

Bharara opened a formal criminal investigation into wrongdoing exposed in the publication of the Panama Papers. Bharara sent a letter to the International Consortium of Investigative Journalists (ICIJ) at the time, asking to speak to reporters on the subject.

Bertus Wilhelminus Antonius Meijer, The Top Producer In Euro-Israel Globalism is sought in Panama Papers and Swiss Leaks related data sets. The Meijer Family Are Considered To Be “The Rockefellers of Europe”. Now their progeny has joined Israel’s dynasty together with Europe’s biggest family fund.

Bertus Wilhelminus Antonius Meijer is the Chairman at MRP Investments Ltd. He was born in December of 1968 and chosen by his father to blaze a path through industrialized Europe with the acquisition and management of cross national interests. With the acceleration of the Israeli/Iran war potential, eyes have been turned towards the international dealings of the Meijers.

The Meijer Family are considered, by State Departments, to be like the Rothschild Family.

The Rothschild family is a wealthy family descending from Mayer Amschel Rothschild (1744–1812), a court factorto the German Landgraves of Hesse-Kassel in the Free City of Frankfurt, Holy Roman Empire, who established his banking business in the 1760s.[2] Unlike most previous court factors, Rothschild managed to bequeath his wealth and established an international banking family through his five sons,[3] who established themselves in London, Paris, Frankfurt, Vienna, and Naples. The family was elevated to noble rank in the Holy Roman Empire and the United Kingdom.

During the 19th century, the Rothschild family possessed the largest private fortune in the world, as well as the largest private fortune in modern world history.[4][5][6] The family's wealth was divided among various descendants,[7] and today their interests cover a diverse range of fields, including financial services, real estate, mining, energy, mixed farming, winemaking and nonprofits.[8][9]

The Rothschild family has frequently been the subject of conspiracy theories.

Paul Johnson writes "[T]he Rothschilds are elusive. There is no book about them that is both revealing and accurate. Libraries of nonsense have been written about them... A woman who planned to write a book entitled Lies about the Rothschilds abandoned it, saying: 'It was relatively easy to spot the lies, but it proved impossible to find out the truth.'" He writes that, unlike the court factors of earlier centuries, who had financed and managed European noble houses, but often lost their wealth through violence or expropriation, the new kind of international bank created by the Rothschilds was impervious to local attacks.

MRP Investments Ltd. is an investment holding company. It operates directly and through subsidiaries in the following segments: Yielding Real Estate and Technology and Biotechnology. Yielding real estate segment engages in holdings in assets through the property companies. The company invests in companies which operate in the field of biotechnology and technology. The company was founded in November 1990 and is headquartered in Tel Aviv, Israel.
Bertus (Bart) Meijer is listed as an Officer with Vertico in California. The address on file  is 1755 E Bayshore Rd Ste 22, Redwood City, CA 94063 in San Mateo County with a phone number of: (925) 891-5697
The company is a California Domestic Corporation, which was filed on May 29, 1986. The filing status is listed as Suspended. The Registered Agent of record resigned On 05/07/2001. The company produced virtual reality theme park equipment.
Meijer is a Dutch surname. It refers to a profession similar to a bailiff or steward. It originates from the Latin word maior.[1]
As of 2007, there are 39,801 people with the surname Meijer in the Netherlands.[1]

His name is usually signed as: Bertus W.A. Meijer and his main company, aside from his shell corporations, is United Companies B. Meijer N.V., a Netherlands Corporation.

He used to live at 2000 Broadway in San Francisco, CA. The company paid his cable TV bills there.

He had a company address for a company called: MAB B.V. located at Van Stolkweg 23, Postbus 80538 GM, Den Haag, Netherlands

United Companies B. Meijer N.V. are a huge conglomerate of business and lobbying efforts.


QAnon on the Rothschild, Saudi & Soros Puppet Masters behind the Deep State (exopolitics.org)
by Justaddcoffee to politics (+25|-4)


Multibillion dollar Meijer, Inc. finds another way to screw Michigan cities and kids
by EclectablogSometimes you just have to ask “How much money and greed is enough?”

Meijer, Inc. is one of the largest privately-owned companies in the country. When he died, Frederick Meijer, the son of the founder of the company, was worth $5 billion. The stores pioneered the concept of “one-stop shopping”, a shopping center where you could buy everything from car batteries to fresh broccoli.This past year, Meijer, Inc. has been challenging its tax assessments around the state, saving itself millions and millions of dollars, money that is coming, in large part, directly from the coffers of the municipalities and schools where their stores are located. The Lansing area seems particularly hard hit:
The Meijer store at 2055 W. Grand River was extensively remodeled and reorganized last year to maintain its footing in the lucrative Okemos market.

Yet, the Michigan Tax Tribunal has accepted an agreement between Meridian Township and the retailer to value the store for property tax purposes between 2010 and 2012 as if it were “dark,” meaning it was closed and for sale during that time.
The settlement means Walker-based grocery and general merchandise chain Meijer Inc. will receive refunds totaling $320,165 from several public agencies, including Okemos Public Schools and the Okemos Downtown Development Authority. And it’s not an isolated case.

The DDA will be required to refund around $86,000 in taxes. The financially-stressed Okemos School District must repay $130,332.

Meijer has successfully challenged assessments at dozens of other stores, including one at 1350 W. Lake Lansing Road in East Lansing. There, the taxable value was reduced a total of $1.4 million for 2011 and 2012, resulting in $203,000 cut in property taxes, said David Lee, tassessor for the city and Meridian Township.

Meijer isn’t the only big box store doing this. Home Depot and Lowes are, too. The result is that these profitable companies are extracting money from schools and the local government at a time when both have already coughed up significant funds in terms of reduced funding to pay for corporate tax breaks these same companies are already enjoying. This only serves to compound a financial catastrophe already in progress around our state.

I understand the desire to maximize profits. All companies have that as their overarching aim. But when you help to destroy the cities in which you operate and the schools of the kids that live in the community that your PR people brag you are so concerned about, the rest of us really begin to wonder just how much money is enough and just how greedy do you have to be before you get labeled as “evil”.