By inserting negative search suggestions under the name of a candidate, search engines like Google can shift the opinions of undecided voters by up to 43.4 percent, according to new research by a team at the American Institute for Behavioral Research and Technology and reported exclusively by Breitbart News.

The lead author of the study, Dr. Robert Epstein, has previously conducted research into what he calls the Search Engine Manipulation Effect (SEME). This research showed that the manipulation of results pages in search engines can shift the voting preferences of undecideds by anywhere between 20 and 80 percent, depending on the demographic.

His latest research looks at how search engines can affect voters by suggesting negative or positive search terms when a political candidate’s name is entered into the search bar. Dr. Epstein’s research found that when negative search terms are suggested for a candidate, it can have a dramatic effect on voter opinion.

The researchers conclude that by using this method of manipulation, search engines can shift a “50/50 split split among people who are undecided on an issue to a 90/10 split without people’s awareness and without leaving a paper trail for authorities to follow.”

The conclusions are based on 16 months of experiments conducted with a total of 1,800 people from all 50 U.S. states. Participants in the study came from diverse ideological backgrounds, including liberal, conservative, and moderate. In order to control prior biases, participants were asked to judge political candidates that they were unfamiliar with.

The research also notes discrepancies with Google’s current search suggestions, particularly with regards to its commercial interests. For example, entering “G” into the search bar in Google will instantly provide users with suggestions to click on search terms about other Google products – Gmail, Google Maps, Google Drive, and others. 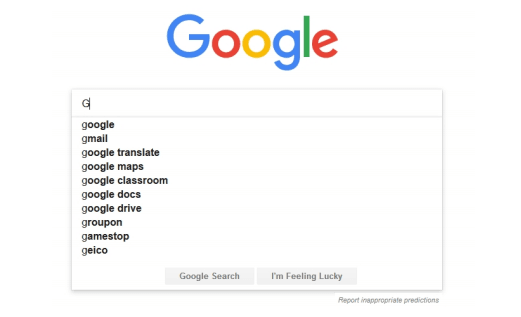 According to the research summary, “The same pattern occurs for other major advertisers on Google, among them Best Buy, Home Depot, Lowe’s, and Zillow.”

“The only companies that are shortchanged by this arrangement are those with names beginning with ‘g.'”