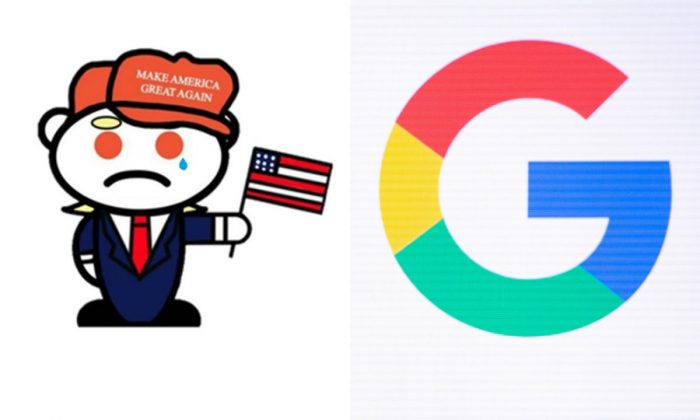 L: Illustration of a Reddit mascot fashioned as a supporter of President Donald Trump. (Image via Reddit); R: Google logo on display during the Game Developers Conference at Moscone Center in San Francisco, on March 19, 2019. (Josh Edelson/AFP/Getty Images)

If a person, by any chance, searched the words “Donald Trump” and “Reddit” together on a number of internet search engines, such as Yahoo, Bing, and DuckDuckGo, he or she would find that the top spot in the results is occupied by r/The_Donald—likely the largest and most active fan club for President Donald Trump on the internet.

Making the same search on Google, however, yielded no such result when repeatedly tried by The Epoch Times on April 12. Not on the first page of the results, not on the second, not on the 10th.

The phenomenon was noticed by a Reddit user QuenHen2219 within days after the news broke that special counsel Robert Mueller concluded his report finding no collusion between Trump’s 2016 campaign and Russia.

“Now I can’t definitively say this, but I noticed something weird,” the user said in a March 25 post. “When you would go to Google and search for ‘Donald Trump reddit’ r/the_Donald would always be the first search result. Now, after the Mueller report dropped, if you Google search the same term r/the_Donald isn’t listed.”

Other users concurred, reporting that Google returned the same result, or lack thereof, for them too.

The Epoch Times conducted a series of tests on March 25, March 26, and April 12 using multiple web browsers in public and private modes, logged in or not—with the same lack of r/The_Donald in the Google results for a plethora of phrases, like “Donald Trump Reddit” and “Reddit The Donald Trump” and even “Reddit The Donald.” 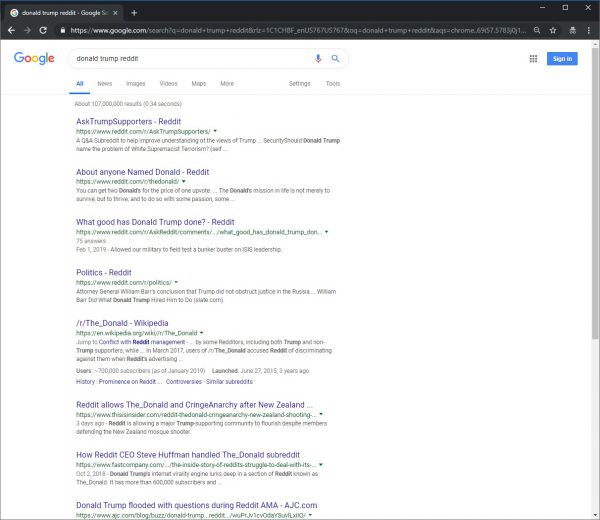 Google search results for the words “donald trump reddit” as shown on March 25, 2019. (Screenshot via Google)

Other search engines consistently showed the page at the top of the results.

The Epoch Times wasn’t able to confirm whether Google used to surface the page for these search phrases in the past.

A Google official commenting on the condition of anonymity denied the company took any action to impact the ranking of the page and said Google didn’t remove it from its page index. The page still appears high in the results, the official said via email, when one looks for it more specifically, such as by searching “The_Donald” or “/r/The_Donald” or “reddit The_Donald.”

The official didn’t explain however, why is it only Google that makes The_Donald more difficult to find.

One possible explanation came in an April 9 report by The Daily Caller, which cited internal Google documents as saying that the company has something called “fringe ranking: not showing fake news, hate speech, conspiracy theories, or science/medical/history denial unless we’re sure that’s what the user wants.”

Google didn’t respond to questions on whether the “fringe ranking” applies to r/The_Donald. Left-leaning press has, however, repeatedly accused the page’s users of being hateful.

The page was created in June 2015, less than two weeks after Trump announced his candidacy. It has since grown to more than 730,000 subscribers and has commonly ranked as the third most active subreddit in the Reddit list ranking tool.

Its content is, by definition, 100 percent supportive of the president and generally of conservatism. Its other focus is criticizing and ridiculing Trump’s opponents, particularly leftist politicians, celebrities, and media. Its humor and commentary is at times insulting, inaccurate, and/or based on speculation.

Google and other tech companies including Facebook and Twitter have been consistently accused of bias against right-leaning content. The companies have denied political bias, but a growing stack of evidence shows they may have been applying their “hate speech” and other policies unevenly, perhaps without being aware of doing so.

“There’s no intentional filtering of conservative perspectives, but many of the people in these roles [of content management] aren’t aware of what non-left-leaning perspectives even are—they just aren’t exposed to them,” former Facebook senior engineer Brian Amerige previously told The Epoch Times via Facebook Messenger.

The company itself acknowledged that “there is no universally accepted answer for when something crosses the line” of hate speech.

Despite that, one Facebook engineer even mused in a leaked communication that the company has to suppress “content near the perimeter of hate speech” too.

Journalist and commentator Tim Pool suggested having a “hate speech” policy reflect a left-leaning bias to begin with.

“I would be willing to bet that a conservative running a social network would not have a hate speech policy,” he said during his March 5 interview on the Joe Rogan show with Twitter CEO Jack Dorsey and Vijaya Gadde, Twitter’s global lead for legal, policy, and trust and safety.

Internal Google materials leaked to media have indicated the company manually tweaks search results on topics it deems “controversial” and maintains a blacklist for pages that violate its “misrepresentation” and “good neighbor” policies. Such pages then don’t show in the News and other infoboxes on the search result pages, The Daily Caller reported.

Google doesn’t appear to provide any public explanation of how a page ends up on its blacklist or how online publications like The American Spectator and Conservative tribune reportedly ended up on it when there seems to be no indication either has broken Google’s content policies for News Publishers.

“We do not manually determine the order of any search result, nor do our algorithms or policies attempt to make any judgment on the political leanings of a website,” a Google spokesperson said in an emailed statement in response to the Daily Caller report. 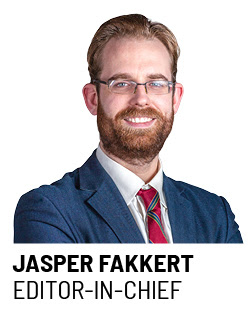 Please make a small contribution to The Epoch Times and you’ll be making a big difference. The Epoch Times is committed to truthful, responsible journalism. We cover important news other media ignore. Case in point: we have been at the forefront of reporting on the positive changes our country is seeing, such as a record-breaking economy and record low unemployment, while also exposing socialist influence in America. Our Editor-in-chief Jasper Fakkert urges you to support our independent media. Every contribution, big or small, counts. Help us keep piercing through the surface narratives of other media, and bring you a comprehensive picture of what’s really happening in our world. Let's walk this path together. Please donate today.