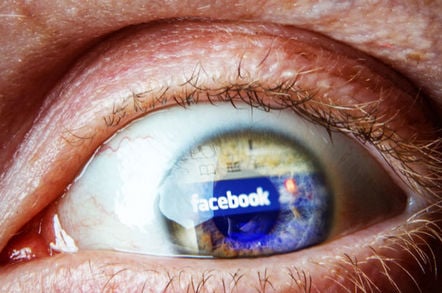 British MPs have made unprecedented use of Parliamentary powers to send a serjeant at arms to the hotel where the boss of a US software biz was staying to seize potentially damaging documents on Facebook.

The cache allegedly shows internal messages – including from Mark Zuckerberg – that demonstrate the social network actively exploited a loophole in its policies on access to users' friends' data that allowed Cambridge Analytica to walk away with info on 87 million people.

The decision to seize the documents marks a major escalation in what was, until now, mostly a war of words between the parties. Zuck has flatly refused MPs' requests that he give evidence in their inquiry.

The chairman of the much-snubbed Digital, Culture, Media and Sport Committee, Damian Collins, said the group had taken the extraordinary step because it had thus far "failed to get answers" from the firm directly.

The MPs took advantage of a rarely used Parliamentary mechanism to compel Ted Kramer, boss of app-making biz Six4Three, to hand over documents – filed under seal with a US court – during a trip to London this month.

According to The Guardian, a serjeant at arms was sent to his hotel with a final warning and a two-hour deadline – after which Kramer was reportedly escorted to Parliament and threatened with fines or prison time if he didn't comply.

Six4Three is understood to have obtained the documents as part of the legal discovery process during its court case against the Zuckerborg, in which it is alleging Facebook defrauded app developers by changing data access policies.

The app dev said it had invested $250,000 in an utterly charming app that allowed users to find pictures of their friends' friends in bikinis during the period in which Facebook's Graph API policy allowed apps to suck up not just users' data but also that of their friends.

This isn't the first time MPs have tried to use this archaic Parliamentary rule to bend Zuck to their will.

In May this year, they threatened to issue a formal summons against Zuckerberg the next time he landed on UK soil.

"While Mr Zuckerberg does not normally come under the jurisdiction of the UK Parliament, he will do so the next time he enters the country," Collins said.

"We hope that he will respond positively to our request, but if not the Committee will resolve to issue a formal summons for him to appear when he is next in the UK."

Even Rupert Murdoch agreed to give evidence after receiving such a summons.

Crucially to this scandal, Six4Three has claimed that this was as a result of encouragement from the firm, accusing the biz of "weaponising" users' data to bring in cash after desktop ad revenues slowed as a result of the surge in smartphone use in 2012.

As the software biz would have it, Facebook implied this tap would remain on indefinitely – but, amid growing public concern about this unfettered access, Facebook turned it off in 2014 and 2015. Six4Three alleged this effectively defrauded firms that had based business on this access.

Facebook has rubbished the claims, saying they are "entirely meritless" and that it "has never traded Facebook data for anything".

However, Facebook is nervy about the MPs having access to the documents because – despite them being under seal in the US – Parliamentary privilege offers various legal protections for members discussing such documents.

"I understand that Parliamentary privilege protects participants for anything said during a hearing of your committee," said Facebook's veep of policy Richard Allan, who is due to appear in front of the MPs tomorrow.

"However, I am also mindful that this matter is sub judice before a court in California. It may be helpful for us to discuss this matter again after we have further guidance from the court."

In response, Collins emphasised that the committee believed the cache contained "important information" on Facebook's policies that are "of a high level of public interest" and relevant to its long-running inquiry into misinformation and data-harvesting.

I have written back to Richard Allan at Facebook following their email to me today regarding the documents ordered by @CommonsCMS from Six4Three. You can read a copy of it here pic.twitter.com/lXWS2gOPBM

What's supposedly in the documents?

The cache amassed by Six4Three during the discovery process is reported to include internal emails and messages between Facebook execs discussing how to use and exploit these policies.

Documents filed with the Superior Court of San Mateo in May this year claim Facebook used this access to information en masse as a way to boost ad spending after the desktop advertising business lost out to smartphones in 2012.

"Zuckerberg weaponised the data of one-third of the planet's population in order to cover up his failure to transition Facebook's business from desktop computers to mobile ads," The Guardian reported the document as saying.

If true, it would mean Facebook was not just aware of the data hose used by Cambridge Analytica to extract 87 million people's information, but also that it actively flagged up this loophole to developers for its own benefit.

Six4Three's filing makes this connection, saying the evidence demonstrates the scandal "was not the result of mere negligence" but the "direct consequence of the malicious and fraudulent scheme... to cover up [Zuckerberg's] failure to anticipate the world's transition to smartphones".

Facebook has sought to paint the complaint as a spurious attack on the firm because it had done the right thing by reducing access to user data.

"The repeated filings demonstrate that this is more about attacking our company than it is about a credible legal claim," Allan said.

"While plaintiffs are free to file any complaint they wish to, however far-fetched, it is important not to take claims made in commercial cases like these at face value." ®